I first saw this dish made on Alton Brown’s show Good Eats and I thought it was pretty cool.    It’s not really a good entertaining dish in that it doesn’t serve a bunch of people and for breakfast, and it’s pretty labor intensive.  However, if you are serving a smallish group or a family, this is a pretty impressive dish.

This dish resembles a few others.  When eating this dish, you get hints of the influence of German Pancakes and Yorkshire Pudding.  Crispy in parts, soft and soufflé-y otherwise.   On the whole, a fantastic addition to your breakfast regime, if you are eating carbs/gluten/other stuff that is likely not good for you.

As for the history of the Dutch Baby, the recipe supposedly has its origins in Manca’s Cafe in Seattle.   A recipe for the Dutch Baby from Manca’s ran in Sunset Magazine in 1971, making it a popular dish.  There are LOADS of recipes now for this dish.  I stick to a fairly classic version that uses a cast iron skillet.  In order for this recipe to work, you have to preheat the pan, not just the oven.  Also, as you’d like to remove the Dutch Baby from the pan when finished, you want to employ pans or methods that aren’t prone to sticking.    I like cast iron for this task for a variety of reasons.  It’s naturally non-stick if seasoned correctly.  But most importantly, I don’t trust coated non-stick pans in high heat environments.  I won’t say I never use non-stick pans, but I especially don’t use them with heat over medium.  With cast iron, no worries.  And, while I could use my stainless steel and lots of oil, I really don’t want to take a chance.  It’s not like you get any redos on this recipe.  It’s pretty much a one shot deal.  It’s an easy one shot deal, however.

My recipe was inspired in part by a recipe I found on Food Network.

Place clarified butter in a cast iron skillet (about 9-10 inches) and place skillet into the oven.  You may ask if you can substitute butter.  I’m leery of butter for this recipe, as this cast iron skillet will get hot (see the 400 degrees above) and you’ll really not be watching the butter melt as you are making the batter.  Clarified butter is the safer choice.  You could easily end up with burned butter here.  Any other high heat tolerant fat would be fine here as well.

Place remaining ingredients in a mixer and mix at medium speed until well combined.  Remove skillet from the oven (with an oven mitt!!!) and swirl butter completely around the pan (again, with oven mitt!!).  If the butter is excessive, whisk surplus into batter.  Pour batter into pan and bake until golden brown and puffy, about 20-25 minutes.  Serve sprinkled with confectioner’s (powdered) sugar. 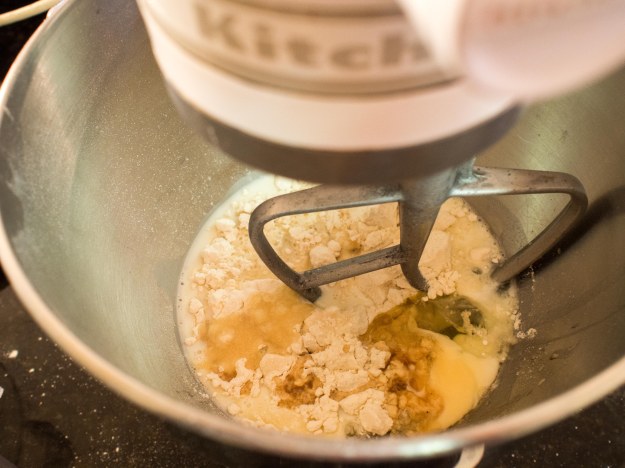 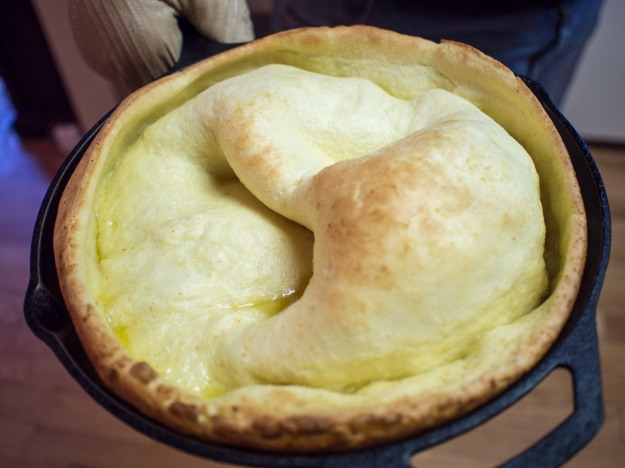 Right out of the oven. CAUTION HOT!!!