I’m not a tuna fan.  Opening a can of tuna is one of my least favorite things to do in the kitchen.  My husband, however, is a huge fan.  HUGE.   We have very different tastes, to put it mildly.  One day he came home with tuna salad from the Whole Foods deli.  He remarked about how amazing it was and how I should try it.  I did.  For tuna salad, it was pretty good.  Then I saw the price.

$10,99 a pound.  Seriously!?!?  Are there gold flakes in it?  I pay less for steak! That’s right, you can go to the meat counter and get a nice steak for less money.  And I’m paying more for tinned tuna?  Consider the gauntlet thrown.  Can I make this cheaper?  Yes, I can! Even using dolphin safe, pole caught, made in America tuna. Although, this recipe would be much, much cheaper using less expensive tuna.  Not that I would.  I’m all for made in America.

First, I had to deconstruct the Whole Foods salad.  Corporate espionage, if you will.  The tuna was definitely higher end, and the salad was studded with olives.  Where go olives, there are usually capers.  The usual suspects of onion and celery were there in the salad as well.  Seriously, this was no big deal.  And, I got to customize it.  My husband likes a wet salad, so I added lemon.  I also added garlic powder.  I’m not a fan of biting into raw garlic.  Finish the whole thing off with some mayo, salt and pepper, and….. mission accomplished!

These measurements are relative.  It’s not like you can really mess this salad up.  If you like more onion or celery, by all means you more!

Combine the tuna, celery, onion, olives, capers and garlic powder in a bowl. Break up the chunks of tuna if they are too large.  Add mayonnaise until you reach your preferred consistency. Sample the salad and salt and pepper to taste. 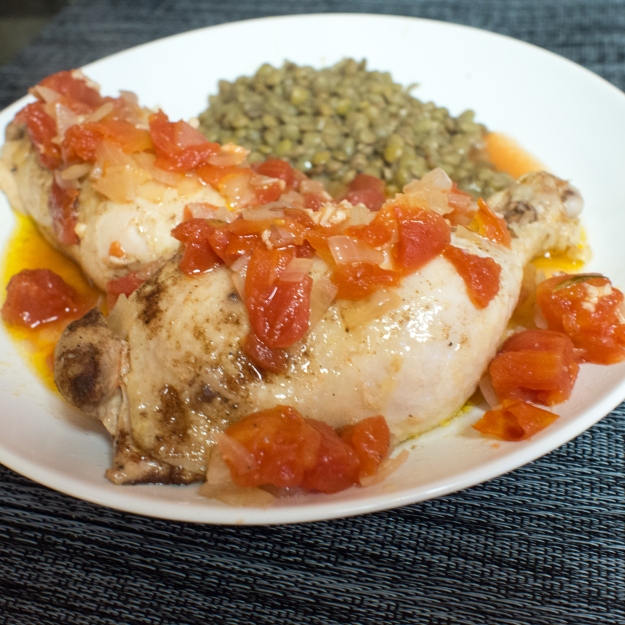 My mom and I have “disagreements” over my shopping at Whole Foods.  She thinks it’s a rip off and the food is overpriced.  I’ve heard the snarky “Whole Paycheck” used as well.   Can Whole Foods be expensive?  You betcha.  If you compare grass fed ground beef made from cows that were raised on a pasture and never saw a feedlot at $8.99 a pound to the stuff in a big box store for $1.99 a pound that may or may not be butchered by illegal workers or comprised of the meat from 100 different cows from “North America”, it may seem expensive.  But you are also comparing a BMW with a Ford Escort.

So, I “re-did” my Greek Chicken and saved my receipts to see what it would cost.   First, some ground rules as to what this “costs”.  I don’t track the cost of spices (unless they are odd and can’t be used elsewhere), fats (butter, olive oil, etc.), onions or garlic.  These items, hopefully, are pantry staples and hard to parse out how much 1/2 tsp would “cost”, so to speak.

I got the leg quarters for $1.49 a pound, for a total of $5.02.  These are “level 2” chicken quarters, which means the chickens they are from aren’t crated or caged (except for transport), no antibiotics or animal byproduct feed, and an “enriched” environment that encourages pecking, perching, etc.  Additionally, the chickens need to have no more than an 8 hour journey to slaughter.

Total “ridiculous” Whole Foods cost:  $7.22 and I have two plates leftover for lunch!  Now, for those tsk tsking me for calling my tomato the veg on the dish and not having something green.  I could have gotten a bag of organic broccoli for about $3.00, bringing my total to $10.22.   But I wasn’t feeling the “green” foods on this particular day.  Plus, the lentils were green, that counts, right?  And lentils are a “superfood”.   Fine, next time I’ll add a more substantial veg than tomatoes.  🙂

Made this recipe again using Cauliflower as “rice” for a paleo meal.

If doing this with Cauliflower, as shown above, cost is $2.99/head.