As you know, I love a good food story.  Somehow it elevates the dish beyond a concoction of ingredients.   Country Captain is one of those dishes that you may be inclined to pass over in a cookbook.  It’s a fairly old recipe, but born during a time when the name of the dish wasn’t exactly descriptive.   What’s Country Captain?  It’s a chicken dish.  A really, really good chicken dish, adapted by British soldiers who had visited India and brought to the southern port of Savannah, Georgia in the 1700s.

When I first started perusing historical cookbooks, I was so startled to see curry listed as an ingredient in an American Cookbook, you know, way back then.  Truthfully, in my little area, there are precious few Indian restaurants.  If you want Indian food, you have to travel quite a bit to find it.  So, I didn’t really have curry in my house until a few years ago.  I may cook gumbo, eat sushi, have kids that eat escargot, and go to Indian restaurants for lunch, but use curry?  Not so much.   Country Captain was my attempt to introduce my kids to something with curry in it.  They liked Greek Chicken, so I was hopeful this will go as well.

I should mention, the rise of this dish has an amazing backstory.   (See the whole article here) There was a famous socialite in Columbus, Georgia by the name of Mary Bullard.  Mrs. Bullard, legend has it, wanted to serve her guest, President Franklin D. Roosevelt, a spicy southern meal.  After perusing many cookbooks, she came across Country Captain and with few alterations, served it to the President.  He promptly took her cook to the White House to become the head chef!  If that wasn’t enough, General George Patton, on his way to Fort Benning, begged Mrs. Bullard for her Country Captain.   Roosevelt and Patton are thought to have spread the word about  Country Captain and gave the dish great notoriety.  James Beard called Country Captain second only to Southern Fried Chicken as the most important inherited chicken dish our country has.  Frankly, had I not seen Country Captain in Mr. Beard’s cookbook, American Cookery,  I wouldn’t have known it existed.  He dedicated 3 recipes and 2 pages to it.

This is a sublime dish, combining chicken, tomatoes, curry, onions, peppers, currants and almonds.  If you have time for this dish, most of the cooking occurs in the oven, which for me suits my weeknight meal schedule.  While it’s in the oven, I can check homework, clean up, etc.

You’ll understand why Patton was desperate to get a hold of this dish before he departed for Europe. It’s truly, truly good. I didn’t change too much about the recipe, except updated the format and used cauliflower “rice” for real rice and used chicken thighs, skin on.  Otherwise this is Mary Bullard’s recipe she served to President Roosevelt and General Patton.  How cool is that?!?  As a bonus, it got two thumbs up from the kids!

Heat oil over medium high heat in a frying pan. (Going forward, I would use a dutch oven, that way there’s less mess to clean up. But staying true to the recipe, I used two pans.)

Pat chicken dry. Combine flour, salt and pepper. Coat chicken in flour mixture. Fry chicken in heated oil, in batches, until each side is golden brown. Remove chicken from pan and set aside and keep warm. According to Mrs. Bullard, keeping the chicken warm is the secret to the success of the dish!

Lower the cooking temperature to the oil to medium low.  While stirring constantly, add onions , green peppers and garlic and cook slowly until the onions are translucent. Add salt, white pepper and curry powder, and cook for 1-2 minutes. At this point, Mrs. Bullard advises to taste the mixture and adjust the seasonings to taste. (Personally, I’d wait for the addition of the rest of the ingredients). Add the tomatoes, parsley and thyme, stir to combine and bring to a slight simmer.

Place chicken into roaster (I used a dutch oven), cover with tomato mixture. If the tomato mixture doesn’t adequately cover the chicken, Mrs. Bullard suggests rinsing out the frying pan and adding it to the roaster. Place the lid on the roaster and place in a 350 degree oven for about 45 minutes.

Place chicken over rice or, as I did, cauliflower “rice”. Add currents to the sauce and pour over chicken. Garnish with almonds and additional parsley.  Serve with mango chutney, if desired. 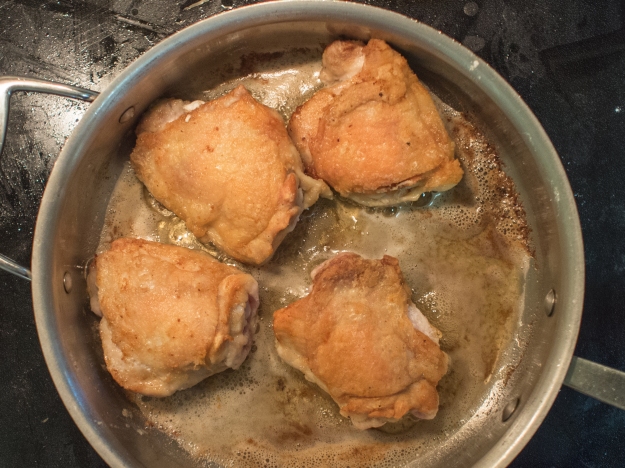