There’s nothing that seems to scare the crap out of people more than flour, salt, solid fat (butter, lard, shortening), and cold water.  In other words, pastry.   When I bring pies to places people cannot believe I have made my own pie crust.  It’s like a bucket list item:  Climbed Everest, Visited Easter Island, made own Pie Crust.  Done.

The Food Industrial Complex has made people so complacent that most don’t see the need to make their own crust.  Just unroll the crust from the refrigerated section of your grocery store and BAM! pie crust.  But is it really?  Gummy, lacking any snap or palpable flakey layers, is it really pie crust?  Or something lesser.  Let’s look at the competition.

My ingredients?  Seriously: flour, sugar, butter, lard, salt and cold water.  No competition.  I’m not even sure what Wheat Starch is and why it is the largest ingredient on the list.  Flour is a distant third.  What’s wrong with their ingredients that they need to add food coloring?  Oh, that’s right, there’s no butter to give the “pie crust” a warm golden color.

The competition is rather sad.  A pale imitation of real pie crust.  In The 1892 Boston Cooking School Cook Book by Fannie Farmer (yes, she was a real person), there is an entire chapter dedicated to pastry.   In this chapter Fannie Farmer divides pastry by duty.  Puff pastry was suitable for rims and upper crusts of pies, vol-au-vents, patties, rissoles, bouchees, cheese straws, and tarts.  But is never for lower crusts!!  Puff pastry is made exclusively with butter, according to Mrs. Farmer.   Plain paste, with a mix of lard and butter, was more suitable for lower crusts.  James Beard detailed various pastry in 9 pages of his American Cookery published in 1972.    Today, sadly, most people don’t make pies much less pie crust.   After reading these books, it is easy to see why.  The first few sentences of Mr. Beard’s introduction are flat out intimidating:

Flaky, tender pie crust must have a delicate balance of fat and flour and not too much liquid.  For this reason, measure the ingredients carefully. Too much flour can make a tough crust; too much fat, a greasy crumbly crust; and too much liquid will in turn require more flour and result in a tough crust.

But persevere!  Look at the Pillsbury ingredients.  There are no liquids.  What do you think you have there?  A tough, non-flaky mess.  That is your competition.   If your dough is “tough”, seriously, who’s going to know?  Few people expect a flaky crust anymore because most are used to the industrial stuff.  That’s the worse that happens.  You make a crust with no preservatives that is still better than what you can roll out of a package.  Fear not!

The recipe is super easy and if you have a food processor, it’s laughably easy.  You will scoff at yourself for ever being too intimidated to try.

My goal here is to get you to make a great crust.  Give it a go, so to speak.  You don’t have the time?   Is 10 minutes too long?  If you take out the time it takes to assemble the ingredients, it takes 2 minutes, tops to actually “make” the crust.  Then it rests.  Then you roll it out.  Done.  I make mine the day before I need to make the pie.

This recipe is adapted from Paula Deen’s Perfect Pie Crust.  It is a sweet, but not too sweet crust and very aptly named.

Sift the flour, salt and sugar together in a large mixing bowl. Work the lard into the flour mixture with your hands. Work quickly so that the lard doesn’t get too warm. Add the cold butter and quickly work into the mixture until the flour is crumbly, like coarse cornmeal. Add the ice water slowly until the mixture comes together, forming a dough. Gently shape the dough into a ball. Divide the ball into two, shape into disks, wrap each disk in plastic wrap, and refrigerate for at least 30 minutes prior to use.

Place the flour, salt and sugar in the processing bowl, pulse until combined and aerated. Add the lard in pieces and pulse until incorporated. Add the cubes of butter a few at a time, pulsing between additions until the additions are incorporated. Slowly drizzle the water into the bowl and pulse. Stop adding water when the dough comes together in the bowl. Turn the dough out on a floured surface, gently shape into a ball, and divide the ball into two disks. Wrap each disk in plastic wrap and refrigerate for 30 minutes prior to use.

It’s really that easy.  Use for almost any recipe that requires a crust.  This recipe makes two 9 inch pie crusts. 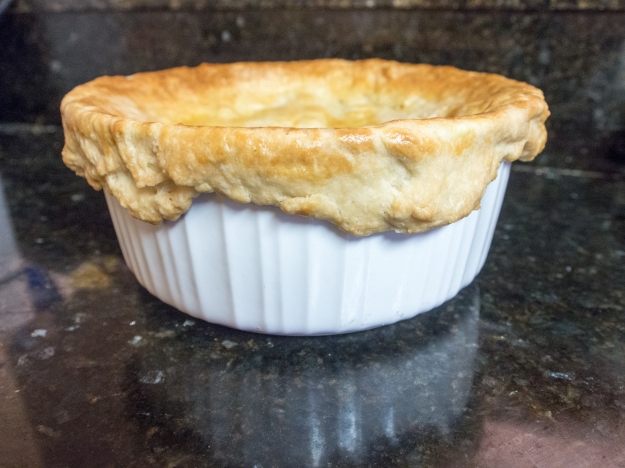 2 thoughts on “Pie or Pastry Crust”