You may think I’ve only photographed the blueberry waffle, but no, the bottom waffle in the back is the Chocolate Chip one!

As followers of my blog may be aware I have a boy and a girl. The boy likes bold flavors. He makes hot sauce (like Tabasco) with his daddy. The girl eats in the “white” food group: potatoes, chicken, pancakes, waffles, apples, bananas, etc. with a few exceptions like salmon (because it’s pink!), hot dogs (ditto) and strawberries (almost pink!). However, my boy and girl have come to an impasse. The boy has tired of my chocolate chip waffles. He’d like a different flavor. The girl seeks no such change. There will never be anything wrong with chocolate chip waffles to her. Ever. She could have the same three meals forever: chocolate chip waffles (or doughnuts), hot dogs, and salmon. The girl never tires of the tried and true.

So, as I was looking through my fridge I noticed a container of sour cream I bought for a meal and forgot to put out. Oops. It’s about to expire,. I also have some blueberries that I bought as a snack for my son. Apparently, he found other things on which to snack. Imagine. Anyway, I asked him about blueberry waffles. He enthusiastically said yes and asked if I can add some lemon flavor to it, because he likes that combination. Ok….

At this point, the girl has stated that she will not eat blueberry pancakes. Of course she won’t. So, decide to divide the batter in half. Some for the blueberry and lemon waffles and some for the chocolate chip waffles. Oh the mess I will make!! The dishes I will do!

So, I need a waffle recipe to use up my sour cream. I don’t like wasting money on food I forgot I had! The White House Cookbook by Fannie Lemira Gillette (1887) and The Good Housekeeping Woman’s Home Cook Book by Isabel Gordon Curtis (1909) have recipes for “Cream Waffles” that use sour cream (but ironically, not cream). James Beard has a recipe in his American Cookery (1972) that is nearly the same of the aforementioned titles. I think sour cream may be have been different back then. I made the recipe and ended up with a really thick batter that wasn’t pouring anywhere, much less onto a waffle iron. So, I thinned out the batter with whole milk to make it pourable and problem solved. The waffles are really rich and very good. Even the blueberry lemon ones!! If you want to only make one type of waffle, just double the extra ingredients of the type of waffle you want to make (e.g. 2 cups of blueberries, 2 teaspoons lemon juice, and 2 tablespoons of flour).

Combine the dry ingredients (flour, baking powder, baking soda, salt and sugar) in a large mixing bowl and whisk together until combined and aerated.

In a separate, smaller mixing bowl, whisk together the sour cream, eggs, butter, vanilla extract, and 1 cup of the milk.

Stir the wet ingredients into the dry ingredients. If the batter is too think, add the remaining milk in parts until the right consistency is achieved. Divide the batter in half and separate.

Stir the chocolate chips into the remaining 1/2 of the batter and cook according to your waffle iron’s instructions. 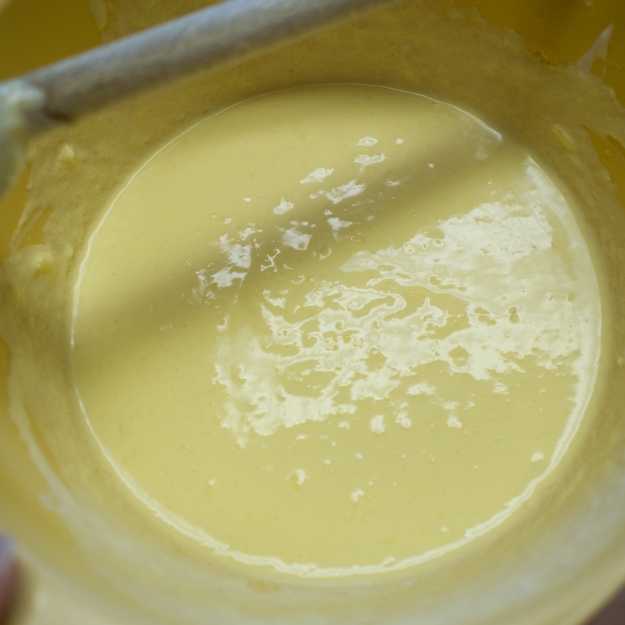